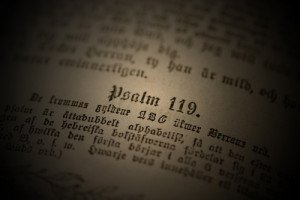 Being a Biblicist in an unbiblical world is challenging. Long past are the days when children were taught to read using the Bible. It is no longer culturally correct to evoke the Word of God in public. Even those within the church often bristle when Scripture is revered as absolute, literal, and authoritative. Compromise is the demand and concession is the norm. God’s Word, if spoken at all, must be unifying, peaceful, and affirming of human needs, to gain worldly acceptance. But Christ gave the following warning concerning God’s message to the world:

The gospel is divisive and exposes the inner heart of man. It reveals belief or unbelief, obedience or disobedience, worship or idolatry, humility or pride. The illumination of Scripture asserts the glory of God and the depravity of man. The exposure of sin would be unbearable except for its remedy, the Lord Jesus Christ. But even the remedy will be refused by most and accepted by few. And as Jesus teaches, even those we love will turn away from the truth and often reject the believer who reads, proclaims, exalts, and seeks to live out God’s Word. The writer of Hebrews details this divisive impact:

For the word of God is living and active and sharper than any two-edged sword, and piercing as far as the division of soul and spirit, of both joints and marrow, and able to judge the thoughts and intentions of the heart. And there is no creature hidden from His sight, but all things are open and laid bare to the eyes of Him with whom we have to do (Heb 4:12-13).

Thus, when Biblicists speak, live, and teach in accordance with Scripture, the result will be like a two-edged sword. God’s Word is deliberate in its intent, piercing the soul, and judging (exposing) the heart of everyone who is in proximity to its effect. The Bible is clear that no individual is immune to the working of Scripture and that our hearts are laid bare before Christ, to whom we are accountable. This is a glaring and unsettling fact; all will give answer to “Him with whom we have to do.” Believers and atheists, faithful followers and apostates, meek and bold, submitted and wayward, will each respond to the same truth. There is no other scale; no alternate template of measurement.

A purveyor (teller) of truth must know that the success of his/her ministry is not found in its outcome. Rather, the success of biblical ministry is determined by the accurate handing of God’s Word (2 Tim 2:15) and the minister’s obedience to speak “truth in love” (Eph 4:15). The end result of truth is dependent upon the sovereign activity of God, as He interacts with His creation. Jesus told this parable:

“The kingdom of God is like a man who casts seed upon the soil; and he goes to bed at night and gets up by day, and the seed sprouts and grows–how, he himself does not know. The soil produces crops by itself…” (Mk 4:26-28b).

Consequently, the result of biblical activity is not ours to know. Ministers must “cast seed upon the soil”; we must transmit the unblemished, undefiled seed of God, which is His Word. That is the call of every believer and it comes at great worldly peril. It is impossible to honor the kingdom while also pleasing and making comfortable, the world. James wrote:

You adulteresses, do you not know that friendship with the world is hostility toward God? Therefore whoever wishes to be a friend of the world makes himself an enemy of God (Jas 4:4).

Obviously this is not God’s permission to make war with people, but rather with the values and affections of earth. We cannot be in agreement with a carnal version of truth that is fluid, humanistic, and offensive before a Holy God. Yet we are to love, teach, and expose the people of the world to good seed; the eternal truth of Scripture which is the essence of Christ.

For the Christian, truth is not a concept, philosophy, or position. Truth is the Person of the Lord Jesus Christ. Through the Bible, the world is exposed to the gospel which speaks exclusively of Him. Jesus said:

“You search the Scriptures because you think that in them you have eternal life; it is these that testify about Me; and you are unwilling to come to Me so that you may have life” (Jn 5:39-40).

Clearly the rejection of Scripture is the rejection of Christ. Without exception, the Word details this reality repeatedly, and demands a reply. Often the reply is an unequivocal “no”. And within this rejection there is disdain for Christ, disdain for the truth, and disdain even for the messenger that has sown the seed. Jesus warned believers:

The administration of truth will be trying indeed if one’s goal is worldly affection and agreement. Too often the gospel is altered by well-meaning ministers trying to gain access and acceptance with secular people. But the gospel is a scandalous truth that requires the shedding of blood for the remission of sin. The Bible states:

And according to the Law, one may almost say, all things are cleansed with blood, and without shedding of blood there is no forgiveness (Heb 9:22).

It is impossible to make this truth more palatable so the masses will concur. Instead the gravity and depth of sin is amplified in intensity when one considers its penalty: eternal death. Such a notion is radically opposed to the humanistic ideal of universal goodness. But to those being drawn unto salvation, it is a truth of the greatest love and most marvelous rescue. Paul wrote:

For the word of the cross is foolishness to those who are perishing, but to us who are being saved it is the power of God (1 Cor 1:18).

We must then surmise that speaking truth is a dangerous calling, destined for hardship and even persecution. In fact, the absence of conflict in biblical care could reflect a withholding of truth for the sake of corrupted peace. When leaving the church at Ephesus, Paul was confident in the completion of his call:

“You yourselves know, from the first day that I set foot in Asia, how I was with you the whole time, serving the Lord with all humility and with tears and with trials which came upon me through the plots of the Jews; how I did not shrink from declaring to you anything that was profitable, and teaching you publicly and from house to house, solemnly testifying to both Jews and Greeks of repentance toward God and faith in our Lord Jesus Christ. And now, behold, bound by the Spirit, I am on my way to Jerusalem, not knowing what will happen to me there, except that the Holy Spirit solemnly testifies to me in every city, saying that bonds and afflictions await me. But I do not consider my life of any account as dear to myself, so that I may finish my course and the ministry which I received from the Lord Jesus, to testify solemnly of the gospel of the grace of God” (Acts 20:18-24).

Notice that Paul “did not shrink” from the delivery of “anything that was profitable.” He endured the “plots of the Jews” and now anticipates that wherever he goes, “bonds and afflictions await…” Paul has surrendered himself to the advancement of the gospel and no longer considers his life “of any account.”

It may seem dramatic to liken our ministry to those in biblical history, but in fact our calling is the same. And to the degree we answer our assignment, our suffering will be similar. Surely counselors and ministers may suffer for wrongdoing and our execution of truth will be imperfect. But even when we are accurate, loving, contextually correct, patient, and persevering, we will be agents of division and vessels of confrontation, useful only in the purposeful hand of God (Is 55:11).

Ministers of truth will be hated just as the world hated Christ (Jn 15:18-19). We are appointed to share in His suffering (1 Pet 4:1). Still we must guard our hearts and make certain the conflict produced is not the result of personal sin but rather the affront of Scripture as it bears upon the soul and conscience of the world. Peter gave this encouragement:

If you are reviled for the name of Christ, you are blessed, because the Spirit of glory and of God rests on you. Make sure that none of you suffers as a murderer, or thief, or evildoer, or a troublesome meddler; but if anyone suffers as a Christian, he is not to be ashamed, but is to glorify God in this name (1 Pet 4:14-16).

3 thoughts on “A Biblicist in an Unbiblical World…”