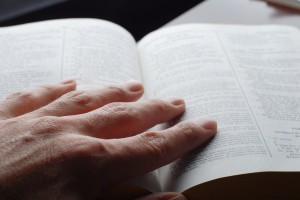 Theology is the study of God and God’s relation to the world. Consequently, all believers are theologians in pursuit of truth pertaining to our Creator and His revelation of Himself to His creations. Our theology (knowledge and belief about God) must come from Scripture as there is no other reliable source by which believers can discern absolute truth. Paul stressed this point when addressing spiritual maturity:

As a result, we are no longer to be children, tossed here and there by waves and carried about by every wind of doctrine, by the trickery of men, by craftiness in deceitful scheming; but speaking the truth in love, we are to grow up in all aspects into Him who is the head, even Christ…(Eph 4:14-15).

When we forsake the veracity of the Bible to search for truth, we are subject to chaos and vulnerable to the “waves” of opinion and experience that carry us astray. Believers often become deceived through the manipulation of truth by those advancing a personal agenda as a spiritual reality.

Case in point is the growing trend toward Experiential Theology, which defines God through personal experience, emotion, and the subjective discernment of reality. Experiential theologians are easy to spot because they rarely reference Scripture, and when they do, typically the presentation of the Word is misrepresented and contextually flawed.

The theology of experience is often evident the church’s discussion of “mental illness.” Increasingly pastors and counselors define emotional problems as medical rather than spiritual issues and they frequently site personal experience as their guidepost. Many point to family, friends, church members and even themselves to justify this position and to advocate the use of therapy, medication, and other secular approaches of care.

The most recent pastor who has captured the ear of the church is Perry Nobles, the senior pastor of New Spring Church in South Carolina. In his recent article “Should Christians Take Medication For Mental Illness?”, Nobles speaks openly about his personal struggle with depression, anxiety, and panic.

The pastor states that he once believed Christians should avoid psychotropic medication and rely upon prayer and Bible study. But Nobles’ view changed when he personally experienced depression and anxiety that were “brutal.” When he found no relief through counseling, the pastor “humbled” himself and accepted a prescription for medication. The medicine reportedly made him a “better husband, father, and friend.”

In his article Noble does not reference Scripture. He states confidently, “scientific research has proved over and over again that chemical imbalances in the brain can lead to cases of anxiety and depression.” Nobles’ personal testimony is inspiring to anyone who is desperate for relief but it is alarmingly lacking in truth.

In a previous article entitled, “Psychiatric Medications: In Search of a Biblical Context” I provided a review of several studies, which leave the Christian with many unanswered questions regarding the science of mental illness and the use of psychiatric medications. Even the scientific literature has not agreed on a position.

Dr. Kenneth Kendler (2005), a psychiatrist and co-editor in chief of the journal Psychological Medicine said: “We have hunted for big simple neurochemical explanations for psychiatric disorders and have not found them” (p. 433).

In his book, Blaming the Brain (1998), Elliot Valenstein , professor emeritus of neuroscience wrote: “Although it is often stated with great confidence that depressed people have a serotonin or norepinephrine deficiency, the evidence actually contradicts these claims” (p. 292).

Stanford psychiatrist and researcher David Burns is quoted as saying: “I spent the first several years of my career doing full-time research on brain serotonin metabolism, but I never saw any convincing evidence that any psychiatric disorder, even depression, results from a deficiency of brain serotonin. In fact we cannot measure brain serotonin levels in living human beings so there is no way to test this theory” (as cited in Lacasse & Gomory, 2003, p. 385).

But more startling that Nobles’ ignorance of science is his abject avoidance of the Bible. This experiential theologian expects his audience to accept the position that one’s spiritual life has nothing to do with depression, anxiety, and fear. Regrettably Nobles rejects the opportunity for spiritual transparency and excuses his struggle repeatedly as medical.

In his second article on the topic entitled “Am I Still A Christian If I Have Depression,” Nobles claims depression is an “epidemic” and that “29% of Christians in the United States have struggled with depression…” But where does the pastor get these statistics? He does not provide a source for these numbers; only his passionate claim. Nobles rightly states, “Christians are not immune from depression,” but emphasizes the alleviation of pain over the transformational objectives of God.

In his second article, Nobles finally makes a biblical reference. He states that many biblical “heroes” struggled with depression and “imperfection.” He references Moses, Elijah, Jonah, and David and states: “If God used messed up, depressed people back then, He can use an overwhelmed, depressed person now!” But is this truly the message God presents through these biblical characters?

Moses did suffer despair and frustration throughout his ministry but consider the reasons. When he was called to set God’s people free, Moses was living in exile, hiding from the consequences of murder (Ex 2:15). Sin had placed Moses in a precarious circumstance. Once called to service, Moses would suffer great hardship and trial, providentially permitted and necessary for the purposes of God to be achieved. Believers will suffer in service of God’s will and must persevere rather than seek relief (1 Pet 1:6-9).

Additionally Moses suffered because of his sinful heart and actions while on mission for God. Moses was eventually denied access to the Promised Land as a consequence of disobedience (Deut 34:4-5).

Elijah fell into despair because he feared human threat and left his appointed position. Estranged from God, he hid in a cave far away from the assignment he had been given (1 Kings 19:14). While Elijah had witnessed many profound acts of God, he fled rather than endure God’s sovereign appointment (1 Kings 19:1-3).

Jonah struggled in bitterness, wrath, and disobedience as he attempted to flee the Lord and refuse God’s will (Jonah 4:1-3). In the end he asked for death due to the defilement of his heart.

God referred to David as “a man after My heart” but his trials and depression were largely the residue of his sin with Bathsheba and the murder of her husband Uriah. The prophet Nathan told David:

Now therefore, the sword shall never depart from your house, because you have despised Me and have taken the wife of Uriah the Hittite to be your wife.’ “Thus says the LORD, ‘Behold, I will raise up evil against you from your own household; I will even take your wives before your eyes and give them to your companion, and he will lie with your wives in broad daylight. ‘Indeed you did it secretly, but I will do this thing before all Israel, and under the sun’” (2 Sam 12:10-12).

Nobles never uses the word “sin” as a component of depression, yet the Bible speaks of it repeatedly as the source of pain and despair (Jas 1:14-16). Nobles does not reference the providence of God and the necessity of suffering as components of the Christian life, although Scripture is replete with examples that Kingdom service bears tribulation (Job 1:8, Matt 24:9, Lk 22:31). Nobles does not reference the discipline of God as “sorrowful” yet necessary in the Christian life (Heb 12:11). God does chastise His children (Heb 12:6) and He further prunes His servants so that they might grow in fruitfulness (Jn 15:2, Rom 5:3-5).

Based on these examples, depression comes by sin, disobedience, unresolved emotion (especially bitterness and anger), spiritual attack, and the sovereignty of God. How then can we make the claim that such mental suffering is without spiritual influence?

The experiential theologian would have us believe his testimony, which basically supersedes Scripture. But believers must be cautious and check everything reported against biblical truth to verify its accuracy and application. Good and proper theology must be built and grown from Scripture and no other sources. We must be like the Bereans who “received the word with great eagerness, examining the Scriptures daily to see whether these things were so” (Acts 17:11b).

We must also guard our deceitful hearts (Jer 17:9), which long to hear explanations for our human state that affirm and endorse what we wish to believe. Regrettably many believers would rather be “sick” than accountable and will settle for physical relief in place of transformation. Sound biblical doctrine is our only protection and we must not submit to emotion and desire as our guide:

For the time will come when they will not endure sound doctrine; but wanting to have their ears tickled, they will accumulate for themselves teachers in accordance to their own desires, and will turn away their ears from the truth and will turn aside to myths (2 Tim 4:3-4).

2 thoughts on “The Danger Of Experiential Theology…”